Beeria nematocera: The most interesting rove beetle in the world*^

A few months back I was asked to identify some Staphylinini specimens from Prince of Wales island in Alaska by Derek Sikes. If I remember correctly there were a lot of Atrecus and Quedius (pretty boring things for a neotropical rove beetle guy like me who is used to beetles like this) but one specimen made the whole sorting worthwhile: 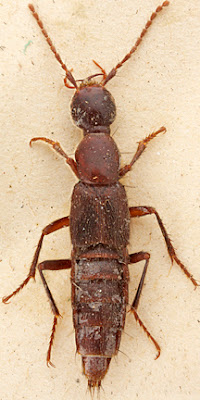 I present to you Beeria nematocera (Casey). The species was first described by Casey who described it in Philothus from some specimens collected in the Pacific Northwest. Later Smetana (1977, paper behind paywall) transfered the species in its own genus and for a long time it was considered a "hybrid" between Philothina and Quediina.

The species is extremely rare in collections (I will be shocked if there are more than 10 worldwide) and I know that several rove beetle systematists have sampled the type locality without being able to collect any specimens. The specimen I received was collected by Derek and students in a pitfall trap and the habitat looked like this:

Yeah, good luck collecting Beeria down there without a trap.

The detailed record for the specimen can be found on the Arctos database that Derek maintains at the Museum of the North (love the name by the way), University of Alaska here and here.

A recent morphological phylogenetic analysis of Staphylinini (Brunke and Solodovnikov 2013, paper behind paywall) placed Beeria as the sister group of 'Staphylinini propria' ("Anisolinina", Staphylinina, Xanthopygina, and Philonthina). However, the particular position on the tree may be an artifact due to the lack of proper morphological characters to clearly identify the sister group of Beeria. I mean, look at the huge postcoxal process here (yellow arrow): 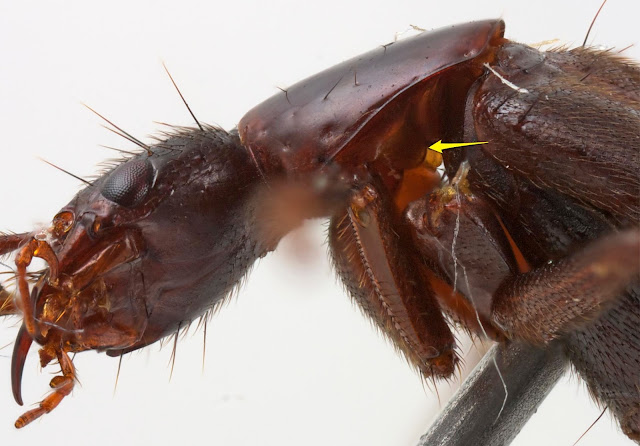 Now, can I have some DNA quality specimens please?

* where 'interesting' means we have no clue where it belongs phylogenetically and I really want it for DNA work, and 'the world' really is North America here.
^ whoa, people are very geographically sensitive. I am not implying here that "the world" is North America; I was just paraphrasing the "most interesting man in the world" commercial...
Posted by Unknown at 9:52 AM