It looks like not all Xanthopygina are brightly colored after all

A new paper just came out where Adam Brunke and I describe a new genus and three new species of Xanthopygina rove beetles. What makes this genus different from any other Xanthopygina that I have recently described is they are dull brown, with short elytra and no hind wings (aptery). You can read the whole paper here (open access) 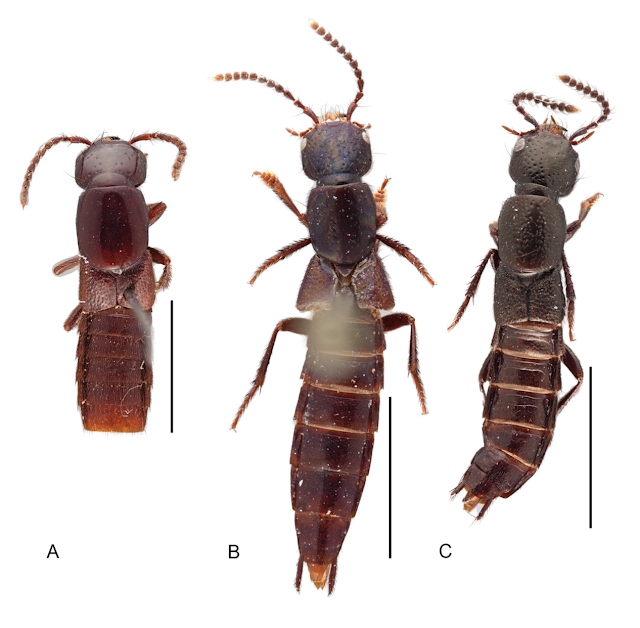 Here is a little bit of background on this paper: many years ago I received a bunch of weird looking rove beetles from Zack Falin at the University of Kansas. Zack is a friend and long term collaborator/enabler of my rove beetle studies. Zack had identified these beetles as Xanthopygina but when I first looked at them, I thought "No way" and left them in a drawer.

Part of the reason why I am writing this blog post is because sometimes we, taxonomists, tend to ignore some specimens and not wanting really to acknowledge their existence.

I sort of repeated this exercise (look at the beetles, say no way) every year for a a number of years until last year. I am working on the revision of Xanthopygus, a multi-year project and I was looking for another project that I could finish relatively quickly so I can publish a revision before the Xanthopygus one. As I was browsing through the Xanthopygina specimens in my office, I noticed these little beetles again and I started looking at them under the microscope. I hated to admit it but Zack was right, these specimens were Xanthopygina. It also appeared that they did not belong in any of the existing genera currently in Xanthopygina. Last year, Adam and I finished a paper where we produced a phylogenetic tree of all known genera ofd Xanthopygina. So we reran the analyses with a few more morphological characters (there are no molecular data for Ikaros) and you can see the results below. We can definitely say that they do not belong in some lineages but until we get molecular data we wont's be able to say exactly where they belong. 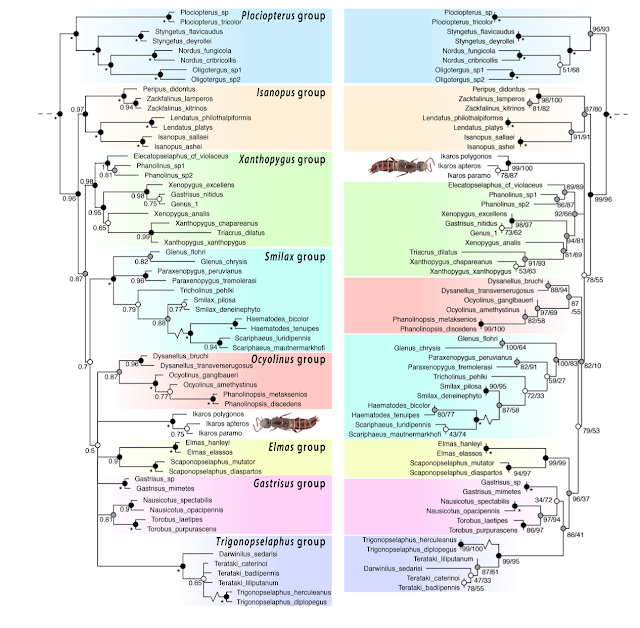 I am particular proud of the etymology for this new genus. As I mentined in the paper: "The word Ikaros is an alternate spelling of the word Icarus, the son of Daedalus who (in the Greek mythology) constructed the Labyrinth. Icarus and Daedalus escaped the Labyrinth by flying with wings made of feathers and glued by wax. However, Icarus flew too close to the sun and the wax melted. The name is rather appropriate for this genus considering these are species found in high altitudes that have lost their wings."

It's been a long time

I have not written anything here for more than two years. I am curious if people are going to read these posts. I feel like people are not really paying attention to blogs anymore, but that may reflect more my tendencies than a genera trend.

Anyway, here is a picture of Xanthopygus cognatus Sharp.

Email ThisBlogThis!Share to TwitterShare to FacebookShare to Pinterest
Labels: Xanthopygina 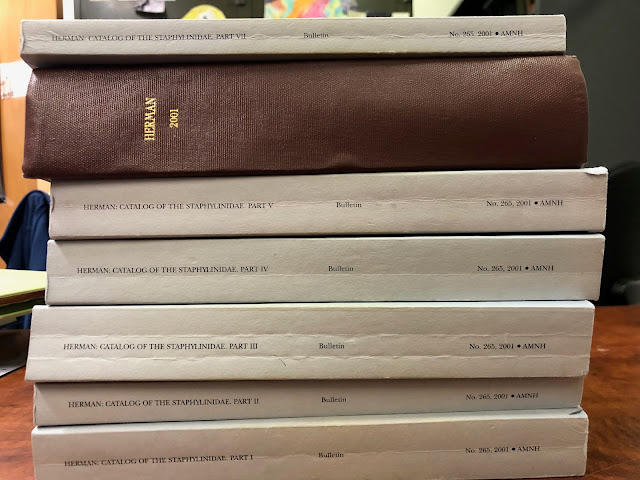 I received my copy of Lee Herman's catalogue in early 2002, while still a graduate student at the University of Kansas. I was actually too shy to write Lee and ask for a copy so Michael Engel did it for me. I remember thinking that there was no reason Lee would send me - a still unknown entity with just one publication -  a copy, but of course I was wrong.

I think it has been by far the most influential publication in my career. Yes, nothing is perfect, and like any paper it has some errors and omission (Aleocharinae, Paederinae...) but I would have been so lost without this, especially early in my life as a graduate student. I still open the volume that contains the Xanthopygina (the one specially bound in the picture) at least once every week. I think it is fair to say that my productivity would have been significantly impacted (in a negative way) if Lee has not published this work.

The amount of work required to produce something as massive as this is almost beyond comprehension and this is why other catalogues spend so much time in the [unpublished database] stage.

Posted by Unknown at 7:00 AM No comments:

I think I am fairly good in self motivating myself to push through projects to completion. Instead of describing two new genera in a simple Zootaxa-style paper, how about we produce a phylogenetic analysis of Xanthiopygina and add all known genera, including these two new taxa? Sure, it will take a year more or so, but it will keep the engine running. 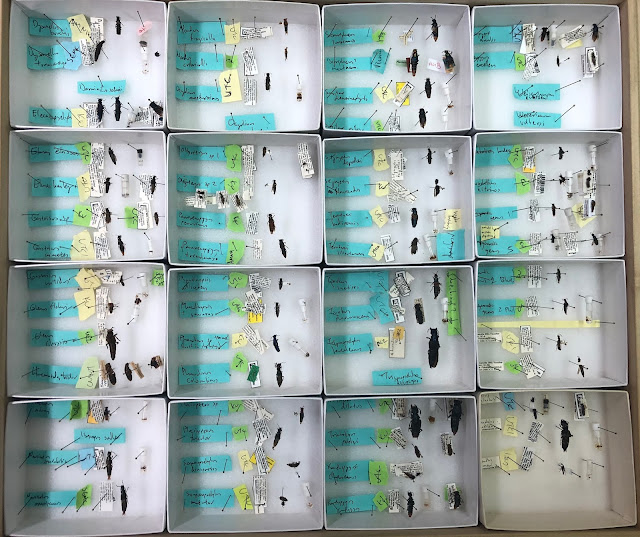 Posted by Unknown at 2:45 PM No comments:

The thrill is gone


One of the biggest challenges for me is to push through a work to publication, when I have figured everything out. Last week I was on Twitter telling the world about how awesome it feels when you finally figure out something -- a unique characteristic that unites a group a three undescribed taxa into a genus.

That glorious moment when you finally find a unique characteristic for a group of species that you thought belong to a new genus #taxonomy
— Stelio Chatzimanolis (@schatzimanolis) October 18, 2017


But then the thrill is gone. I have figured out that this is a new genus. I know that there are three new species. Now I have to show this to the rest of the world. But by this point there is nothing (or almost nothing) new to be discovered. I just have to spend endless hours taking photos, drawing and writing descriptions to persuade my peer community that these are indeed new taxa. But there is very little personal satisfaction in the process and this can slow down the process a bit.

When I was starting out as a graduate student, I was trying to maximize the number of papers I could get and sometimes published papers as"least publishable unit". Now I think I am at the opposite spectrum. Last week I submitted a paper where I was reviewing two genera (Dysanellus and Torobus). And for my next paper I seriously consider putting together a description of two NEW genera together.
Posted by Unknown at 8:32 AM No comments:

Recently I published an new paper describing the genus Phanolinopsis and describing four new species. While writing a paper like that is pretty straight forward once you have figured things out, it usually takes a lot of time to figure things out.

Many many years ago I was visiting a natural history museum examining their collection of Xanthopygina beetles. Among the materials was a specimen of Phanolinopsis erythros.

I was puzzled. At that time, I was working on the revision of Nordus and Philothalpus and had finished the revision of Elmas. Let just say that my understanding of Xanthopygina was limited. I asked a Very Important Rove beetle systematist at the museum there what they thought of the specimen and they looked at it and said: "Yes, I have examined it, I could not figure it out, I doubt you will".

Well, they were right in a sense, it took me 11 years to figure it out. I guess what I am trying to say is that figuring out things in taxonomy sometimes takes a very long time. So while writing a taxonomic paper is 'easy', deciding what goes in that paper may take a lifetime. I have been lucky to be able to work with Xanthopygina for ~17 years now, so I had the time to "figure things out". But I am afraid, the way we do science nowadays does not usually allow for having that much time of working uninterrupted* on a project or taxonomic group.

On an unrelated note, on the same paper I named a new species after my daughter.

* Over the years,  I have worked on other things other than Xanthopygina, from phylogeography to fossils, but I have never stopped looking at these beetles.
Posted by Unknown at 8:33 PM No comments:

The end of Staphylinidae sensu stricto?

I recently submitted a book chapter on fossil rove beetles where I had the following footnote:

" One could argue that we have overextended the meaning of “Staphylinidae” since the family is not very well defined and the subfamilies themselves can probably be elevated to the family status."

The editors kindly asked me to remove it from the book chapter because they did not want to open Pandora's box (their expression, not mine).

So instead, I am just going to put it here, on this blog.

Over the last several years more and more ex-families (eg Scydmaeninae) are getting sucked into Staphylinidae and one could argue that Silphidae should be added soon. Have we reached the point where we need to evaluate what Staphylinidae really is and perhaps elevate "Staphylinidae" to a superfamily? Unfortunately, for some people this is a numbers game ("the largest family of animals") and I do not see this happening any time soon.
Posted by Unknown at 11:05 AM No comments: